The reaction from a host of Manchester United stars to James Garner’s promotion post, following Nottingham Forest’s playoff victory over Huddersfield, could hint towards his imminent return and a potential shot at fighting for a starting spot for the Red Devils.

James Garner has been loaned out to Forest all season, and has been a stalwart in their midfield, playing an astonishing 41 league games this season.

Most comfortable as the anchor in midfield, his play style exactly suits what many have claimed to be United’s biggest issue: a defensive midfielder.

After their triumphant 1-0 win on Sunday, Garner returns to Manchester United with plenty of experience under his belt.

The 21-year-old’s Instagram post, depicting him with the trophy and his medal, prompted streams of congratulatory messages. However, the most interesting came from that of Brandon Williams.

“You were already in the Prem whether you won or lost,” he wrote. “Come home”. 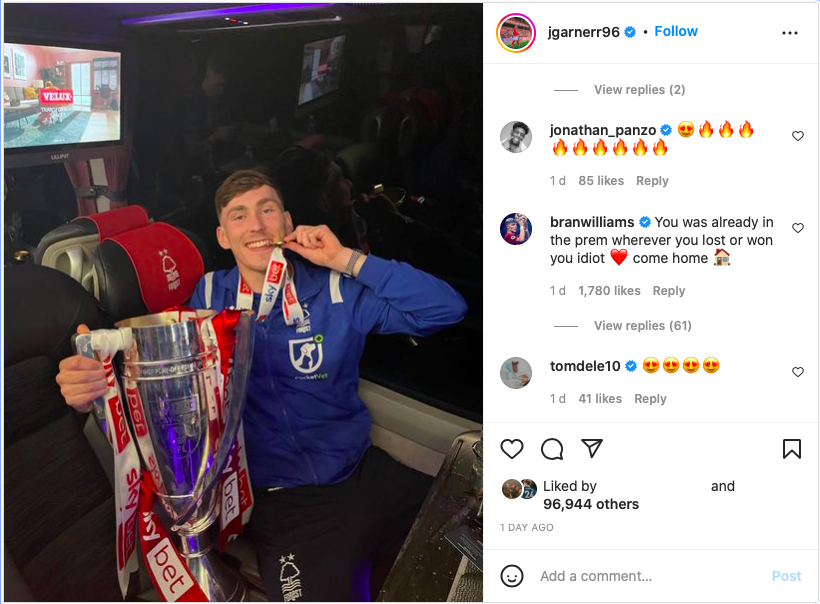 His comment was well received by the United faithful, receiving nearly 1800 likes and a host of supporting comments, which could suggest many would be receptive to Ten Hag giving the youngster a chance to make his mark on an admittedly underwhelming team.

Other messages came from Marcus Rashford, Fred and Anthony Elanga, suggesting the figure is already well-liked amongst the squad.

There could be more to it than a simple heartfelt message, as both players have been out on loan this season. Perhaps the youngsters have been given assurances of opportunities to prove themselves by the new manager.

With Matic set to leave this summer, and fans frustrated with the McTominay and Fred combination in midfield, it appears Garner’s form has picked up at the perfect time to force his way in. He boasts an impressive SofaScore rating of 7.26, and his 1.4 interceptions per 90 betters that of the two he will be battling with.

Bruno Fernandes even claimed that he looks forward to playing with the academy graduate one day on Twitter.

It would definitely be worth giving the £6.3m-rated wonderkid a run in the team, as this season has surely proved he can handle first team football at a high level. Working around the kind of talent the United squad has and will recruit can only further his development.

In other news, one Manchester United star has been linked with a move away. Find out who here.